Cello for Africa: A musical journey of growth and transformation. 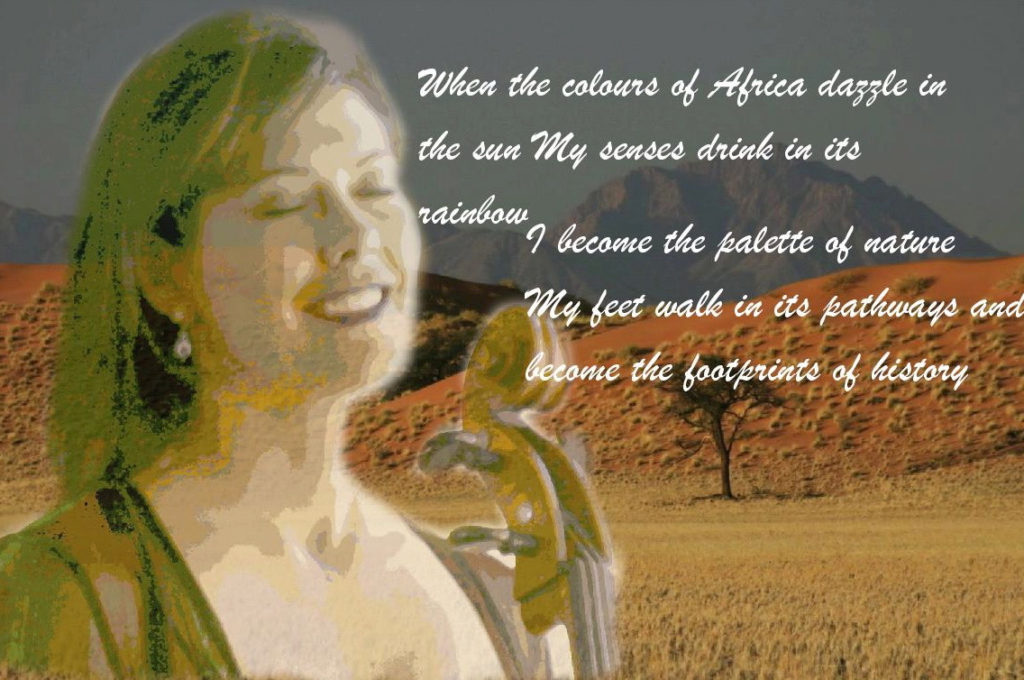 At a personal level, Cello for Africa is a representation and expression of a transformational musical journey with her cello into the Africa of her birth and heritage that came about due to the emotional consequences of emigration from South Africa. Finding herself in the frame of mind of being neither here nor there, she had the desire to connect to her roots and (re)establish her association with South Africa by means of cello performance. Finding a new home and new sites of being and belonging lies at the heart of the personal and universal themes of Cello for Africa. The cello, with its unique ability to voice a huge range of human qualities, becomes a means to express the process of identity formation, of strengthening roots, connecting to place, and finding a ‘sense of place.’

Here, our human connection is central. Through such actions as creating Cello for Africa we bridge gaps between cultures and nations and build and strengthen ties. Connectedness and rootedness can cover infinite distances.  It resonates with the words of Desmond Tutu who famously said, “My humanity is caught up and is inextricably bound up in yours. We say a person is a person through other persons”.

Although it expresses journeys from, to, between and among, Cello for Africa is a project deeply rooted in Africa and ‘Africanness’. Exploring this sense of being and belonging to Africa in terms of the European classical musical practice of my musical discipline, itself reflects the sense of in-betweenness and transition which resonate through Cello for Africa.

Embodying the highest standard of artistry , The Violoncello Foundation, USA

“While du Plessis has covered the standard repertoire in multiple settings and prestigious venues, her special interest in music of Africa has made a deep impression on me. Her work to bring together elements of traditional African music and European art music has identified her as a leader in this genre”

Made a deep impression on me, University of Victoria

“I experienced her performance of Huyssen’s Concerto for an African Cellist. She is an inspiring performer, and an outstanding soloist. Her playing speaks of great virtuosity and agility – but at the same time of a mature artistry – she has raised the cellistic bar with her powerful and extrovert, yet highly refined performances”

“Western Classical tones blend with exuberant native sounds throughout the disc; the highlight is it salutes another culture”

“The culmination of a well-rounded, unique project”

Supported by substantial, competitive research grants the project resulted in an international performance, Concerto for and African Cellist at the Odeion School of Music, University of the Free State, South Africa (2013), as well as a CD recording, Cello for Africa (ODE records 2013).

Although more works were created as a result of the project, the works included in the concert and recording are:

The compositions and performance are characterised by a celebrative atmosphere of things and people coming together, and in the words of Huyssen, “performed for an audience and self-enacted for the performer’s own sake, serving both the format of a ‘concert’ and that of a ‘forum’ for social interaction”. Diversity is celebrated by valuing the unique qualities of each instrument. The cello, marimba, the orchestra, and the instruments of African origin are in dialogue, imitating, and mirroring each other. They complement each other, contrast with each other, and sometimes switch roles, but even in places where they blend, they retain their inherent character and instrumental identity. These compositions provided a transformative space to construct a sense of the social self, and accommodate diversity that reflects multiculturalism. 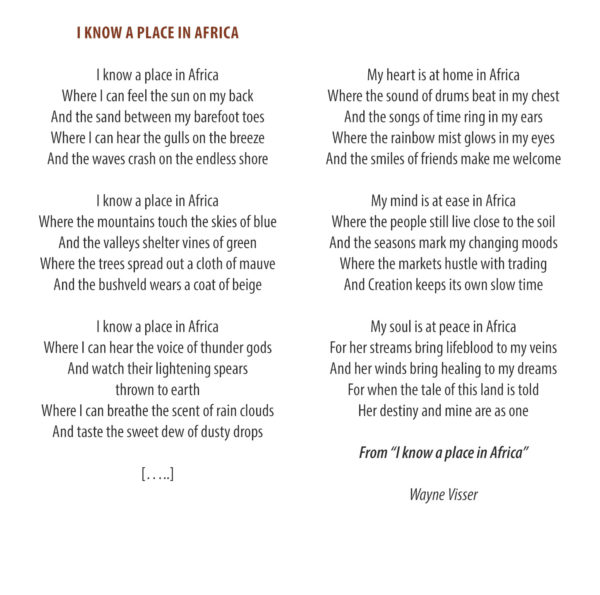 Cello for Africa moves towards the realisation that in our globalised and globalising world, answers lie in the space where people connect, and where their identities come into proximity and overlap. This space where we discover that the ‘other’ is a resemblance of the ‘self’ is the place where Cello for Africa comes to rest. This is represented in the concluding passage of Huyssen’s concerto where the orchestra sings, “You hold the other within.”

Other composers’ compositions that were written as a result of the project  include:

Significance of Cello for Africa

Cello for Africa is a pioneering project in exploring these fusions of identity, place and sound, and is a project of several ‘firsts’.

The CD is the first recording of a compilation of contemporary classical cello music by South African composers. Although Peter Klatzow is renowned for compositions for marimba in combination with various other instruments, A Sense of Place is his first work for this combination. It is also the first recording of a work for marimba and cello by a South African composer.

Concerto for an African Cellist by Hans Huyssen is the first concerto for cello, orchestra and African instruments that includes a movement where voice and marimba are combined with cello.

Further, the CD was one of five nominated worldwide by The Violoncello Foundation in New York, USA, for the 2014 International Listeners’ Choice Awards and acclaimed as embodying “the highest standard of artistry”, and a “genuine attempt to build a meaningful cross-cultural dialogue”. That same year, in Afrikaans newspaper, Beeld, P. Boekooi described its contribution described as “enormous” “unique”, “indigenous”,” enriching” and “universal.”

The groundswell spread to New Zealand. The first Kiwi performance of Klatzow’s Cello Sonata was given by her and Professor Terence Dennis at the Nelson Winter Music Festival in 2012. Shortly after, it received its Dunedin debut at Marama Hall in the University of Otago.

A Sense of Place by Klatzow had its first performance in New Zealand in 2013 at Te Kōkī: New Zealand School of Music, Wellington, New Zealand, with Yoshiko Tsuruta (marimba) together with Klatzow’s Cello Sonata with Terence Dennis (piano). A Sense of Place will form part of the newly formed Duo Col Legno’s programme of their Chamber Music New Zealand tour in 2019.

Cello for Africa in New Zealand 2019 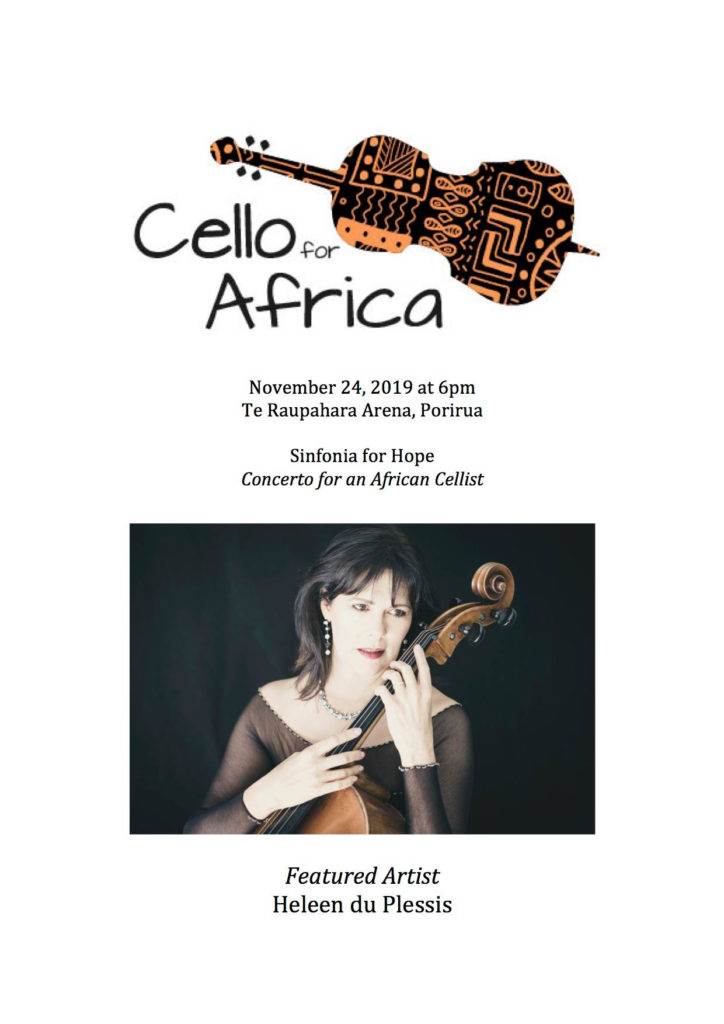 Cello for Africa will be featured as part of a large scale, multi institutional, international collaboration in a concert that will bring together musicians from Africa and New Zealand. Directed and organized by founder of Sinfonia for Hope, Professor Donald Morris of the Victoria University of Wellington, presenting Cello for Africa in New Zealand will open up opportunities to fundraise for a project in Africa and to create a platform for musicians from different cultures to interact in an international arena.

The programme includes Concerto for and African Cellist by Hans Huyssen with Heleen du Plessis as soloist and Huyssen as conductor and the world premiere of ‘Kia Kaha Tamariki’ – the 1st ever work for mass cello ensemble, African and Maori instruments by renowned New Zealand composer, Anthony Ritchie. Cellophonia will be joined by about 40 cellists from all over New Zealand, including Cellists of Otago and University of Otago cello students from Dunedin, and violinist Amalia Hall.

Cello for Africa would not have been possible without a University of Otago Research Grant (UORG), a Humanities Research Grant (HRG), a grant from the South African Music Rights Organisation (SAMRO), National Research Foundation (NRF) and Stellenbosch University grants, funding by the University of the Free State’s Odeion School of Music, and private sponsors.

For Heleen it was a privilege to experience this challenging but transformational and gratifying journey. After all, the main purpose of art is to convey something of human life:

“an expression of time and place, of experience, perception and existence”
(Higgs, G.E. 2008)

Concerto for an African Cellist – by Hans Huyssen

A Sense of Place for marimba and cello
– by Peter Klatzow

Sonata for Cello and Piano
– by Peter Klatzow 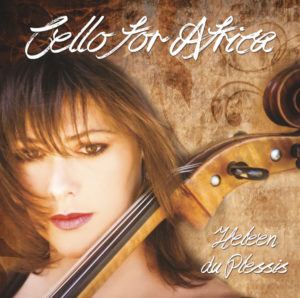