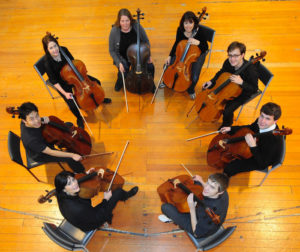 Cellists of Otago is a Cello choir which brings together players of all levels – from high school pupils and university students to professional players.  At present, the group consists of 16 players.

Cello choirs have been popular since the 1970′s, when 12 cellists of the Berlin Philharmonic Orchestra recorded Julius Klengels Hymnus for 12 cellos.  They formed a group and toured, commissioned composers to write works for cellos and gained an international following. But cello choirs existed before that, often the pupils of a teacher playing together and passing on the tradition.

Du Plessis inherited this tradition from the late French cellist Pierre Fournier through her teachers Daniel Grosgurin in Switzerland and Amit Peled in the US, who had been a pupil of Boris Pergamenshikov.  Both Grosgurin and Pergamenshikov had also been pupils of Fournier.

Click here to read an article, published in the Otago Daily Times, on the Cellists of Otago.